On the hardest part of writing

There are a great many overgeneralized statements about writing.  We talk about shitty rough drafts (thanks Anne Lamott), we argue over dialogue tags (I’m a proponent of asked and said and pretty much nothing else), we bitch over the use of the Oxford comma (Vampire Weekend even wrote a song about that one), and we could scream from one end of the English Department hallway to the other for decades about sentence variety and adverb use.  But I think, as far as creative writing goes, there’s one thing that we don’t dare to admit; one thing we don’t like to talk about.

I will tell my keyboard anything.  She hears about long days and stale crushes and lengthy litanies of thought at three am.  I can type words I can’t say out loud.  Before it was a keyboard, it was a gel pen or a dull pencil.  I have always been this way.  The words that get trapped in my throat exit through my fingertips.  Sometimes I wish they didn’t.  But words are my catharsis, letters are my savior, and literature is my religion.

People, mostly teachers, noticed.  I was told here and there that I was good.  But the thought of my writing being read by anyone else terrified me as much as it thrilled me.  The same feeling you get when you tell a secret.  The same rush.  The same regret.  Because words can’t be unmade, undone, unwritten.  They’re survivors, words are.  They scratch themselves into tree bark and flesh, and decomposition and decay do not make them flinch.  How many stories have preserved themselves?  How many transcend time and life and death?  How many voices were never completely silenced?  Words outlive us, if enough people pay enough attention.  The alternative, I suppose, is that no one does, and they die with us.  I don’t know which is worse. 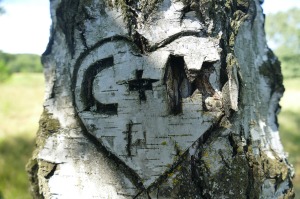 Maybe we would’ve been better off without the alphabet.

Sharing your writing is the best thing you can do for it, if you give it to the right person, and the right person has a bright red pen and experience and is better than you and fearless.  The right hands tell the truth.  Keep the hobby to yourself and that’s all, I suppose, it’ll ever be.

And that is why there is a poem at the bottom of this post.   My relationship with poetry is cyclical and riddled with doubt and secrecy.  I write a poem, rewrite, edit, agonize, rewrite, and edit some more.  I read my favorite poets, compare, agonize, rewrite, edit, and leave the damn thing to rot on my hard drive.  Poetry is vulnerability.  You take a feeling, a moment, and boil all the words away until you’re left with the few that matter.  Picking those is harder than almost anything.  If you’re lucky, they trap the inspiration and it remains between the pages like pressed flowers.  If you’re not, you have odd words and bumbling ends that seem to slide down the page like rainwater on a windowpane.

Did I trap anything, or is this just watery remnants of a sentiment so far gone that it’s melted into oblivion?  You tell me:

I want to vanish into thin air,

let my body crumble into

little particles of flesh and bone and muscle,

feel my feet swept away,

As my eyes stare out the open window

And look straight into the sun.

Let yourself dissolve, she calls to me.

Roar in a ferocious winter wind,

peel yourself away from your skin.

or shiver in deep marine trenches.

Fall into the elements.

It’s all I could want,

the freedom to be absolutely everything

And absolutely nothing at the same time.

To matter without being needed.

2 thoughts on “On the hardest part of writing”